About. Hughes Ranch Road has been on the City’s Thoroughfare Plan  as a planned  raised median boulevard for over ten years. The project design was completed by Brazoria County and construction will be carried out by the City of Pearland.The roadway widening will provide enhanced safety and improved access to adjacent subdivisions, Challenger Elementary, Dawson High School.  With the widening of  SH 288 and the addition of Toll lanes on SH288, a new off ramp will be constructed at Hughes Ranch Road and this roadway will provide better east/west mobility in this area of the City. The 90 percent roadway alignment is included below.

Scope.  The project will reconstruct Hughes Ranch Road between Cullen and Smith Ranch Road from a  asphalt open ditch roadway to a  concrete curb and gutter boulevard for a distance of 2 miles. The project includes approximately 13,000 linear feet of Noise Barrier along the major subdivisions, lighting, and landscaping. Additional water line infrastructure will be constructed in coordination with this project to fill in the gaps of the current water system. The roadway will provide enhanced safety and improved access to adjacent subdivisions, Challenger Elementary, Dawson High School, SH 288 and the SH288 Toll lanes.

Residents can also register to reveive project updates through the City’s e-notification system Everbridge.  Project information is often available through the City’s FaceBook page, Twitter and Instagram accounts as well.  We encourage residents and property owners’ to sign up for the e-alerts and information, please contact Jennifer Lee, Project Manager, at jlee@pearlandtx.gov

Below is budget and funding information for the project below. Last updated January 2020.

New concrete is being poured: Since the restart of the project there remain minor utility relocations that are on-going. The City’s contractor has not been impacted and is prosecuting the work on schedule. The contractor utilized multiple underground crews to regain some time/production and all underground storm sewer is now complete except the last connection at Cullen.

The sound wall installation is progressing well, and installation for the Crystal Lake subdivision will be completed within the week. The contractor has started patching and painting the back side of the wall at Crystal Lakes and will then start tying in the residents fences. Contractor will continue working west until all the wall is complete.

The temporary pavement being installed on the north side of the existing roadway is part of the Traffic Control Plan and will facilitate the upcoming traffic switch planned for the week of March 30. Temporary pavement was completed March 20th .

When/if school returns, there may be an additional detour requiring one-way traffic. However, this will be discussed should this situation occur.

Project staff and Engineering-Projects are in continuous contact with PISD’s transportation manager to share updates and coordinate planning efforts.

Construction resumed on November 4, 2019 after 164 days of interruption following conflicts with gas lines and AT&T copper and fiber lines alone the corridor.

Through collaboration between the City's teams, AT&T and the SH288 managed lane contractor, the major conflicts at Smith Ranch Road were able to be mitigated without the addition of expensive conflict structures. As the delays were caused by unknown utility conflict, the sole remedy for the contractor per the contract is addition days.

Soundwall work was stopped after the bottom one-foot panel was found to have constructability issues and not able to support the 8 foot tall panel. Manufacturer was required to redesign the panel. Contractor is scheduled to start installing the correct bottom panel within two weeks.

Contractor's third crew is preparing the north side of the road the the next phase of the project, which will require installation of temporary pavement in preparation to move traffic in advance of the construction of the eastbound travel lanes.

Hughes Ranch Road has been on the City's Thoroughfare Plan as a planned secondary thoroughfare, with a four lane raised median boulevard cross section for over ten years.   A link to the Thoroughfare Plan is found here. Thoroughfare Plan. The project design was initiated by Brazoria County and handed over to the City at 90% completion when the City annexed the area.  The remaining design and construction will be managed by the City of Pearland. 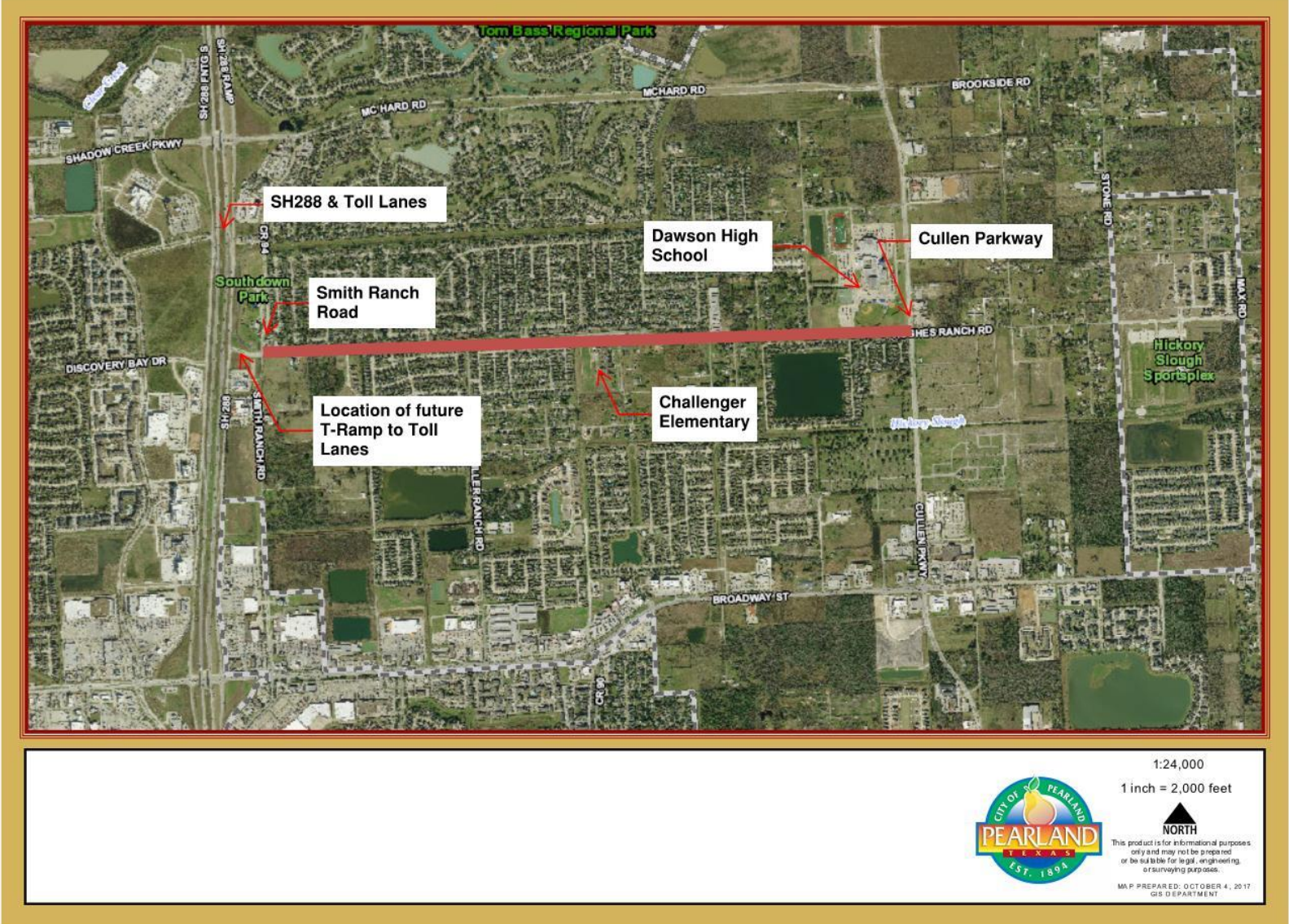