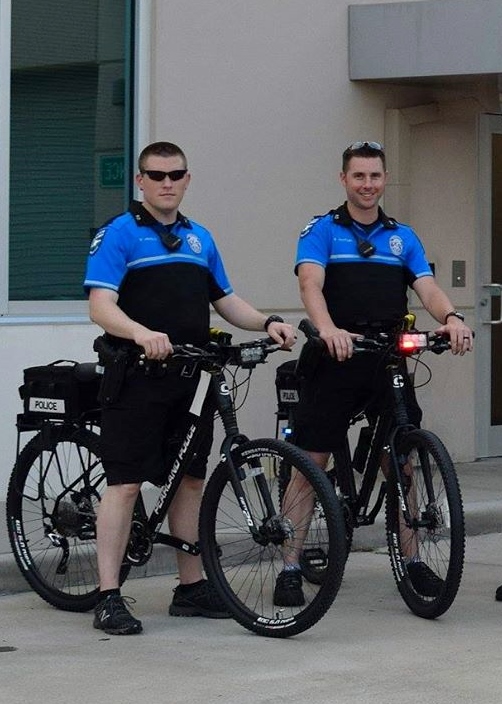 Funded primarily through a Federal grant, the Bike Patrol Unit was established in 2000 and has been a valuable asset to the department. When patrolling on their bikes, officers will normally ride between 20 and 60 miles per shift.  Bike officers will conduct  close patrols of businesses and neighborhoods, answer police calls for service, and even initiate traffic stops.


The residents of Pearland and the business community have found the Bike Patrol Unit to be a great way for officers to patrol businesses and neighborhoods since the bike enables the officers to move almost silently and unnoticed through an area. For example, bike officers can address specific targeted problems such as drivers running stop signs or areas plagued by burglaries.  Additionally, bike officers can be a form of highly visible patrol and crime deterrent when deployed in high-pedestrian areas such as shopping centers and the Town Center mall.


In addition to the typical law-enforcement duties, the Bike Patrol Team also engages in community-oriented functions. The team represents the Department at events such as Little League Opening Day, National Night Out, The Trick or Treat Trail, Winterfest, and the Tour de Lites. The Unit also works closely with the Parks Department to host an annual Bike Rodeo wherein bicycle safety is taught free of charge to children between the ages of four and twelve.

To request a bike safety presentation, please email Sgt. C. Eschete at the link below.