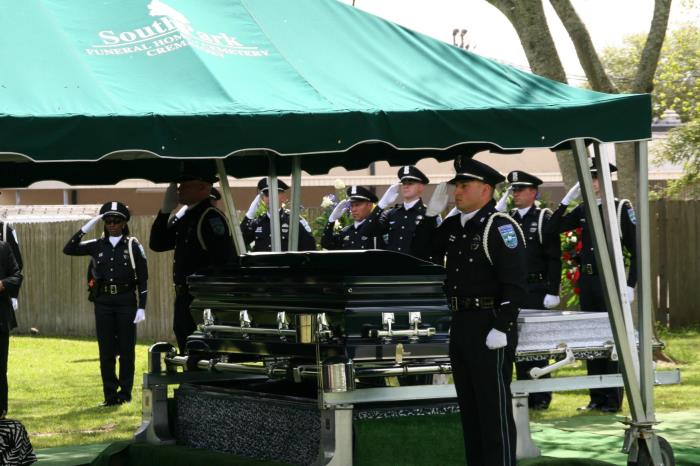 The Pearland Honor Guard was implemented in 1996 to honor officers that are killed in the line of duty or that pass away for other reasons. The Honor Guard is comprised of 18 members, which include a Lieutenant, two Sergeants, and 15 Officers.

The Honor Guard has taken part in funeral services for several Pearland Police Officers and they attend other agency funerals as well. There is no greater respect for a fallen officer than to honor their memory in law enforcement and provide the families of officers the gratitude from the law enforcement community, for one of its own.

The Honor Guard has four separate functions and each function is utilized during funeral services.
The Color Guard is responsible for presenting and posting the National and State Colors (flags). The Color Guard team is what the public usually directly relates with Honor Guard duties.

The Firing Team is comprised of seven officers and is responsible for providing a twenty-one-gun salute during funeral services. This team is also easily recognized as a function of the Honor Guard.
Presentation of Colors

The Casket Guard is not often seen but serves as one of the final acts of respect for the deceased officer. The Casket Guard is comprised of four officers that rotate on time intervals, prior to a funeral service, guarding the casket.
The Flag Folding Team is responsible for folding the flag draped over the casket at the burial site. This is a highly emotional service and one that family members seem to relate to the funeral for years to come.