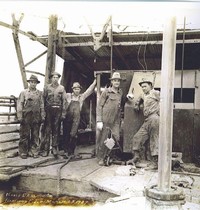 In 1892, William Zychlinski bought 2,560 prime acres of land surrounding the Mark Belt outpost along the Gulf, Colorado and Santa Fe rail line. Zychlinski platted out the original town site in 1894, and named east-west streets Walnut, Pear, Broadway, Jasmine, Plum, and Orange. The north-south streets were named Austin, Pearland, San Antonio, Washington, Texas, Sacramento, Main, Houston, Grand, Park, and Galveston. A year later, the Southern Homestead Company took over the promotion of Pearland to people in the farm-belt states. The area was promoted as having fertile land bringing people from many Midwestern states to settle in Pearland. Early on, a business district formed at the intersection of what is now Main and Broadway. Basic businesses such as a hardware store, general store, lumber yard, printing office, and a hotel served the needs of the community. A four-room wooden schoolhouse and the railroad depot also graced this burgeoning village.


The catastrophic hurricane of 1900, one of the worst natural disasters in North America, destroyed nearly all of the early town of Pearland. The population was cut by almost three-quarters, and only a third of the children returned to school after the mass exodus. To bring people back to the area, the Allison-Richey Land Company began promoting the new development of Suburban Gardens, a model community west of the railroad tracks. Fifteen years later, many new residents had moved in to re-populate the area. Many changes had occurred due to blight and weather. Farmers unable to grow oranges, pears, or strawberries had to choose new staple crops. Figs became the area’s new staple while cattle, hay, and family-owned dairies were growing economies. A two-story high school was completed in 1912 and roads were constructed connecting Pearland to other nearby communities.

A second hurricane blew through Pearland in 1915. The damage to the town was as disastrous as the 1900 hurricane. The top of the new high school was destroyed, and homes and businesses were scattered in little pieces across the fields and town site. The migration of people out of Pearland was also just as bad as in 1900. Both the hay and cattle industries dwindled due to these unforeseen circumstances, and the fig industry was the only one to grow due to a new processing plant in Pearland.

Modernization and infrastructure began during this rebuilding of Pearland. In 1917, telephone lines were strung, and a public phone booth erected. By the late 1930s, with the discovery of oil outside Pearland and the rise in rice production, Pearland was doing well economically. Pearland became the location for dance halls and beer joints. Throughout the 1940s, Pearland slowly grew back to approximately the same population as before the 1900 hurricane. By 1949, the city took its first steps towards becoming a town with the development of the Brazoria County Water Control and Improvement District Number Three. This helped to generate the funding for a water and sewer system. In the 1950s, the Lions Club became responsible for a number of improvements, including garbage collection, sidewalk improvements, and streetlights. In 1960, with triple the 1940 population, the city now had a mayor, city council, and city marshal.

After the incorporation of the city in 1959, the City of Pearland began a slow but steady growth outward, of both land and population. The train station (originally located in what is now known as the Old Townsite area) closed, and was later moved off site in 1980. In 1987, City Hall also moved from Old Townsite, and relocated to Liberty Drive alongside the train depot. The renovated depot served as the location of the Chamber of Commerce offices until 2009, when the chamber moved to a new location.

In general, the pattern of high growth continues. As the Houston-area grows, the City of Pearland continues to become an increasingly desirable location.
View Full Site